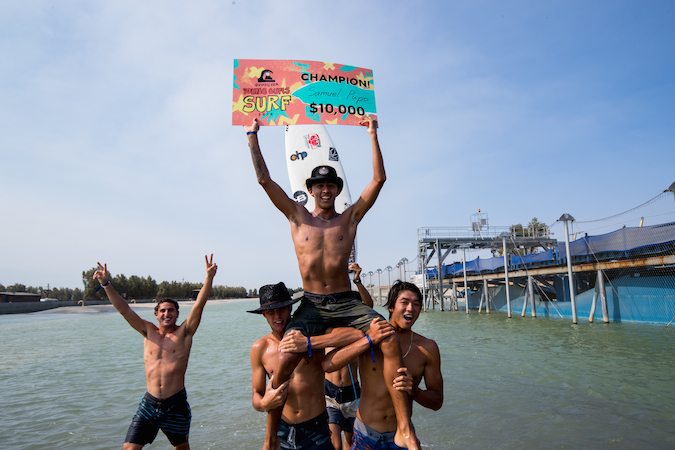 What happens when you gather 4 of the best teenage surfers in the world, let them go on the probably best man-made wave and give them the chance to win $10,000? Well, that’s the 2018 Quicksilver Young Guns WSL Surf Ranch Challenge.

How the event works

The event started in June as Instagramm Challenge and more than 1000 applicants from all over the world took part.

What happens when you round up four of the world’s best teenage surfers, set them loose at the world’s best man-made wave and give them a chance to win $10,000? The #YGSurf judges Leonardo Fioravanti and Kanoa Igarashi reviewed all entries and selected their 8 favourites.

Out of these 8 finalists 3 finally won in a public voting decision, the three winners received an invitation to a showdown in the WSL Surfranch. The field was complemented by a wildcard, another surfer chosen by Kanoa and Leoanardo.

The boys started like the fire brigade, Justin said about his first wave that it was the best he ever surfed in his life. And the level continued to rise in the course of the competition. The fun the guys had was almost tangible, the future of surfing happened here and now.

The contest used a new format: The 500 metre long wave was divided into 3 sections. The finalists positioned themselves alternately in the different sections of the wave, and had to leave them at a given place so that the next surfer could enter. The new format provided one thing above all: a lot of opportunities to show what the kids were capable of and that’s why they could always take full risk.

At the end of the session, everyone was given the opportunity to show how they perform when their legs started to burn.

How do you make the right decision after this amount of impressions: quite simply, you choose the surfer who impressed the most. And of course Leonardo and Kanoa had the last word. And they finally chose Samuel.

“”I could hardly believe how hard the kids ripped” said Leonardo. In the end Samuel just threw the highest airs and had the best railgame. The new format worked great and really got the most out of the kids, but Samuel stood out the whole time.

Samuel Pupo on his victory

I participated in this event for 4 years in a row and won it last year, the Surfranch is very different from other contests. It’s so much fun and it pushes my level extremely, quite different from surfing a normal contest heat. It’s just crazy that I could win here in my last Young Guns year.